In the third instalment of  ABC’s The Killing Season

Paul Howes, former National Secretary of the Australian Worker’s Union,  acknowledged his anger at having our Federal Apology (21/3/2013) interrupted by Simon Crean’s attempt to oust Prime Minister Gillard – who was issuing our apology – the very same day.  Howes stated that he was very angry as he, like hundreds of thousands of non-Indigenous families, illegally torn apart by past government policies, had waited their entire lifetime to hear the representative of our Government and Nation say sorry for what was effectively another stolen generation: the white stolen generation.

I was very glad that our apology was acknowledged during the program as we had such little publicity at the time and as far as I am concerned very little media interest in our issues now.

I got to know Paul as a friend whilst we worked together on the Working Group set up to draft the formal apology to be given by our first female Prime Minister. 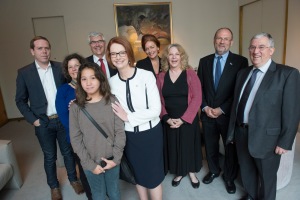 Paul is standing on the far left of the picture, my granddaughter is standing next to our PM and I have a pink cardigan on.  Professor Nahum Mushin is standing at the far right.

For Bio info click on - About - tab and 'A bit about me' Dr. Christine A. Cole Convenor Apology Alliance Australia
View all posts by apologyalliance →
This entry was posted in My Articles and tagged Christine Cole, Forced Adoption, Forced Adoption Apology, Julia Gillard, Paul Howes, the killing season, white stolen generation. Bookmark the permalink.