Posted on August 21, 2014 by apologyalliance

Furness is using  the tragic case of Baby Gammy to promote her pro adoption agenda. In an on-line article published today both adoption and making commercial surrogacy available in Australia are being touted as the answers to the problems that became apparent in the Baby Gammy case.  Unfortunately the article says little about adequate screening of adopters and even less about the long term emotional and psychological ramifications to a child being created via such commercial arrangements.

In the above on-line article Furness suggests taking Baby Gammy from the only mother he has known “as soon as possible” to be given “to a  family”.  She obviously does not consider the woman who carried him for 9 months as his family? Baby Gammy’s Mum is poor and unmarried and certainly can not compete with the affluence, power and prestige of Furness and the people she represents.

Interestingly Furness is silent on the situation of Gammy’s twin sister – who is currently residing  with the paedophile who was wealthy enough to organise the surrogacy arrangement. I believe responses like hers are expected when individuals feel entitled to use another women’s womb to meet their needs.  This IS NOT ABOUT ABANDONED CHILDREN. This has nothing to do with “saving orphans”.   These children are being created purposely to satisfy someone’s need.  There is little difference, except in semantics, when a poor, young, pregnant girl/woman in the US is convinced that it is better for her unborn child to be taken at birth and brought up by wealthier strangers.  In my view this is a form of commercial surrogacy under the banner of domestic adoption.  When the baby has a mother but the adopters stand at the foot of the bed waiting for it  to be born so they cut the cord and take possession, in my opinion that is using another women’s womb for your benefit.  It has nothing to do with the welfare or rights of the child.

Under Thai law, Ms Pattharamon (Goy), Gammy’s surrogate mother, is the lawful mother of six-month-old Gammy (SMH, 11/8/2014, News p. 3).  Yet Furness still advocates for her baby to be forcibly taken.

While she didn’t know all the facts about Gammy’s case, she said a safe home should be found for him ‘as soon as possible’.

‘You know what? Baby Gammy happens every minute in Africa,’ Ms Furness said.

‘There are so many special needs children that families don’t have the physical or emotional resources to care for those kids.

‘They are abandoned vulnerable children and they’re the kids that we need to find families for. ‘So I would say for baby Gammy, we need to find him a family as soon as possible.’

Infertility is very sad, but the worst thing that can happen to a human being is to have their baby or infant taken  and to never know what happened to it.  The trauma, the grief is unbearable and lifelong. Just ask anyone who has gone through the experience of having a son or daugher kidnapped.  Do they ever really recover? The pain, trauma and heartbreak never go away. Eventually they may learn to live with it – So it is a shame that more women do not respect other women enough not to covet their children as does the woman who made the following comment:

SURROGACY IS NOT THE ANSWER TO THE PAIN OF CHILDLESSNESS 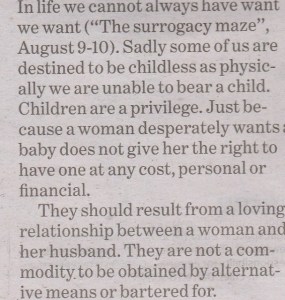 For Bio info click on - About - tab and 'A bit about me' Dr. Christine A. Cole Convenor Apology Alliance Australia
View all posts by apologyalliance →
This entry was posted in My Articles and tagged Adoptee, Baby Gammy, birthmother, Deborra-lee Furness, Forced Adoption, Furness, gestational carrier, infertility, surrogacy. Bookmark the permalink.